This article is part of our new experimental series, Backlog Club, where we (Nintendo Life!) choose a game that might be on our list of “games we should play” and then we (NL + you!) spend the next month to play this game. It’s halfway through, the first part of two, where we stop for a minute to check out the game and how much we’re enjoying it.

I never did homework as a child. Not because I didn’t like to learn, mind you – I’m a big fan of books and that – but because it all seemed a bit useless sometimes. Since homework grades didn’t count toward your end-of-year grade (which was the only thing that really mattered), it seemed like a waste of my very limited free time. I got good grades, why do I need to do extra work too?

But one thing I liked was the logic puzzles. I filled those gigantic magazines with them for birthdays and Christmas, with lots of picross to solve and those grids where you have to decide who ordered the salmon on a Tuesday. I would be pleased, voluntarily doing this homework-like activity because it challenged me and gave me that tasty, tasty dopamine of a job well done.

The return of the Obra Dinn, the hacked and hacked work of logic puzzles by Lucas Pope, gives me the same dopamine hit – but much, much bigger. As much as I loved those omnibus puzzles, they had no music. They had no visuals. I didn’t make it see Andrew eating salmon on a Tuesday, or Susan having her heart stabbed on a Thursday. And, as it turns out, everything it’s more fun when it’s pirate themed.

ROTOD starts on a boat. Not the boat, watch out. Not the Obra Dinn. You start out on a rowboat, but you don’t know it right away: you’re greeted by a color screen of seasickness and the voice of a grumpy man, tasked with escorting you to the Obra Dinn. When you reach the Obra Dinn and climb up its sides, you almost immediately find yourself facing death: there’s a corpse, rotting, right there on the bridge.

Murder! Mystery! Maggots, probably! Your mind is wobbling with the possibilities. You can’t wait to know more.

As a player, you don’t know what to do. You don’t know who you are or why you are here. Your avatar in this world is nothing more than a pair of hands and the occasional voice line, with instructions to investigate the Obra Dinn. But oooh, isn’t a dead body an exciting thing to find? It contains so much potential: Murder! Mystery! Maggots, probably! Your mind is wobbling with the possibilities. You can’t wait to know more.

That’s when your setter shouts: “Oiiii! It’s too heavy!” Returning to him, you take the cargo you brought with you: a book, and a watch. The book is empty. The watch is magical. 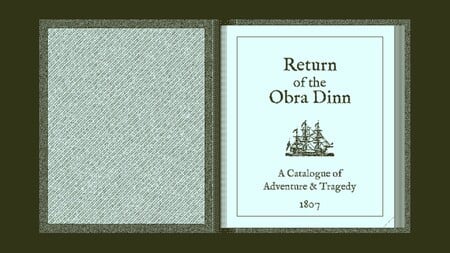 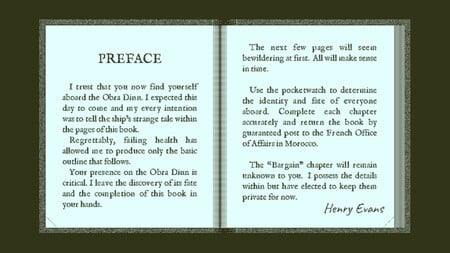 Like the logic puzzles of my childhood, Obra Dinn expects me to make simple deductions. How did the crew of the Obra Dinn perish? But it’s not that simple, not really – they all died in different ways, killed by different people, perils and twists, and it’s by watching each of their last minutes of life that you’ll have to uncover these facts. , as well as their identities. Some are clear – they will say their name or have an identifying factor about their person – others will take hours and clever deduction work to figure out.

So far, I’ve guessed a person’s identity based on whether they’re wearing a wedding ring, and there were only two women on board that I hadn’t identified, and the one was a “Miss Jane Bird”. Another one I identified by carrying a lot of guns, which surely means he’s some kind of heavy shooter. And it only gets harder from there. It turns out that most people in their last moments of life don’t call out their full name, which is understandable, but makes my job a lot harder.

Can’t say it bothers me too much, though, as the atmosphere is incredibly delightful. Aesthetics – which is perhaps the most notable thing about the game, so it’s weird that I mention them so far – have very little to do with the game, and it’s a little divisive, but it doesn’t do not disturb me . The entire game is made in low-fidelity one-bit graphics, mimicking the very first PC games. It’s both crisp and blurry, because anything between dark and light has that “ditherpunk” texture, reminiscent of old computers.

And why did Lucas Pope opt for this look? The answer, from his PlayStation blog, is basically “because why not”, which is extremely admirable:

Obra Dinn’s initial motivation was simple: I wanted to create a modern 3D game that looked like the old 1-bit games I played on my family’s Macintosh Plus when I was growing up. 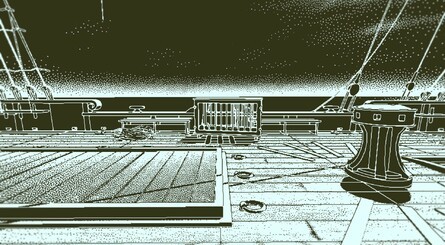 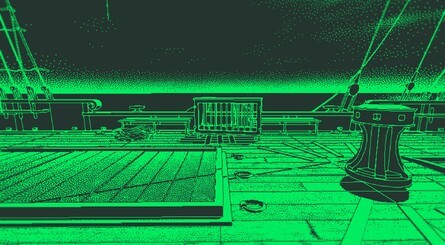 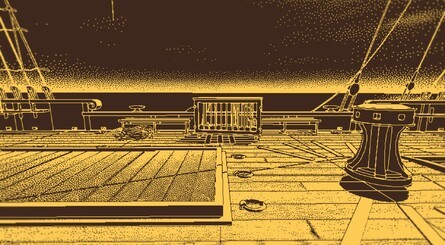 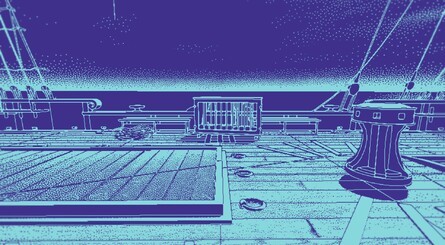 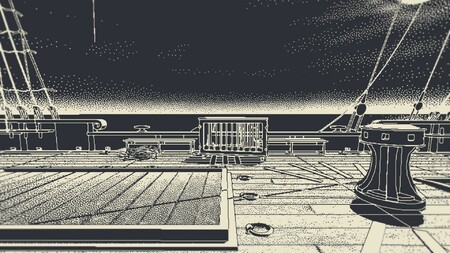 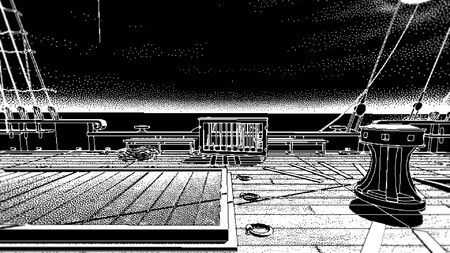 Look at all those colors!!

Obviously, that meant a lot of tinkering, adding outlines to everything and making sure the dithering didn’t just make everything look like a muddy mess. The slightly unreadable graphics also add to the game mechanics: you have to identify people, but their faces are blurry, it’s hard to see how they died, you don’t know who is who. It would be much easier if it was just a normal 3D game. I’m glad that’s not the case.

The music is a bombastic, slum-like soundtrack that combines choppy strings and eerie bells…it makes me feel like I was on a pirate ship.

The music, also by Lucas Pope, is a bombastic slum-worthy soundtrack that combines choppy strings and eerie bells, and while I’ve never been on a pirate ship, it makes me feel like I was on a pirate ship. It has the same wonderfully evocative headings as your book’s table of contents: Soldiers of the Sea, Unholy Captives, and The Calling give you an idea of ​​what you might encounter, but no idea at all.

But it’s the musical stings that make the game tense and compelling. Each time you enter a murder vignette, each time you use your magic watch, and each time your logical deductions are confirmed, a frantic little violin riff plays. It makes me feel like I’m in trouble, with a little nervous thrill, like the music that plays when your house gets robbed in The Sims. This is perfect.

I haven’t finished Obra Dinn’s book yet. The game takes its time guiding you through the 60 dead aboard the doomed ship, basking in the tension of telling the story from end to end, and I can’t say I mind. I feel like I’m watching a dirty movie about horrible things that happen to dithery pirates, slowly tugging at the narrative thread even though I don’t know what’s on the other end. I see glimpses of it – I can register someone’s death as “hit by the hooves/leg/wing”, despite the fact that there seem to be few animals on board, and I saw the tentacles of a large sea beast – but I can’t see the whole thing yet, and that’s the best part of a story.

“Everything will make sense over time,” reads the note I have from the start. Presumably, Henry Evans – my mystery shopper – is right, but to be honest, I quite enjoy the part where nothing makes sense at all. Homework has never been so much fun.

Oh, and one of the best things about Obra Dinn is the developer diary that Lucas Pope created alongside the game. But that’s REALLY spoiler. So: don’t watch it until you’re done, okay? To promise? OK.

How are you enjoying the game so far? Have you finished it yet? Tell me your thoughts in the comments!